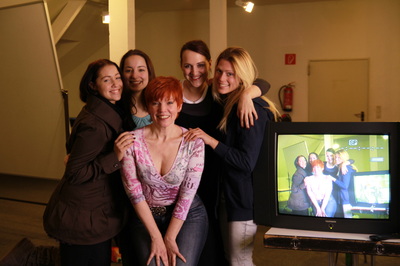 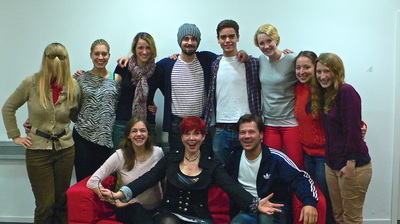 Welcome to "Acting in English"!

I have been living and working in Cologne, Germany for the past 32 years.
I know the challenges of acting in another language other than my own native language of English, and that experience was the inspiration for the creation of this training.
I have trained European actors via Acting in English workshops, or one-on-one training, focusing on preparing the actor for an audition in English or for a role they are actually shooting.
To find out more, please scroll down for more Information and to read the Testimonials.

Have a great day!

Why Acting in English?

Are you fit enough with your English to compete for a role in an international film?  If you aren’t sure, then perhaps this is for you!

“Acting in English” will offer you the following:

Throughout her 37-year career, she has also worked with various private coaches and has participated in many workshops with such renowned instructors such as Larry Moss, Mel Churcher, M.K. Lewis, Mark Travis, Cherolyn Franklin, Petra Gallasch, Jerry Coyle and Margie Haber.

Kathleen has also directed theater plays and shows for events in the U.S.A. and Germany.

During her 40+ years in the entertainment business, Kathleen could be found in many musical and theater productions as well as television and film productions.

In Germany, she has established herself as a sought after voice over actor for industrial films, educational programs and television layouts/spots.

In addition to her performance and directing work, Kathleen has 30 years of experience conducting Business English language training in Germany.

For 22 years, Kathleen has held workshops and has provided English accent training for actors who are interested in working in English in theater, events or feature films. She has also done acting coaching for opera singers and presentation training for German business people.

She has performed her own one-woman show, “A Lost American in Germany”, an auto-biographical, interactive, musical comedy show in Koeln, Bonn, Frankfurt, Berlin, Duisburg, Stuttgart, New York and Philadelphia.
​Coaching Testimonials
“…I first found out about Kathleen through a friend of mine who had received amazing feedback on his US accent after working with Kathleen via Skype. His recommendation was spot on! After working with her over only a few sessions I have received incredible feedback on my "flawless" accent from my (American!) agent as well as from casting directors. Kathleen is precise and prepared - but always creative in her approach to teaching and helping you get through whatever blocks you may have. Most importantly she is kind, caring and completely devoted to helping you as an individual. I couldn't recommend her more highly…”
Soraya Ilona Spiers

"I had to prepare for an important presentation which should be held in English. Kathleen was recommended by a close friend, and turned out to be the perfect English trainer for me. With her experience, her knowledge, her professionalism and her dedication to the job, I learned in a short time how to improve my vocabulary and my pronunciation. I can fully recommend her and wish her all the best for the future and her career on stage. "
Andreas Meltaus, Key Account Manager, Emirates

“I enjoyed our coaching sessions and thought they were really useful to me - they made me more aware of things I had forgotten about, and I liked all the practical exercises that you showed me. I still try to do them whenever I can :)"
Andrea Borges, Certified Interpreter

I had been coaching UK actor Damien Gerard, to help him improve his American accent for auditions for US film productions. Here is a message he sent me:
“I had a really great audition the other day. It went fabulously but as it was over a week ago and I haven't heard, I probably didn't get the role. However, I did get some incredibly positive feedback from the American producer that my US accent was (and I quote) 'flawless'. So this is a huge thanks to my talented American accent coach Kathleen Renish for getting my accent up to scratch.I'm a firm believer that I can't fulfill my dreams alone and I need help from people when it becomes necessary. Even though I didn't get the role, thank you for the help Kathleen, I couldn't have done it without you. No man is an island.”
Damien Gerard, UK

I coached UK actress Rayna Campbell (She had to speak a South African accent), who had the leading role in the feature film (Pandorfilm) “Layla Fourie” in post production ADR in Cologne.
The film was in the main competition at the Berlinale Film Festival  2013 and won the Special Mention award!

Comments from the “Schauspiel Workout - Acting in English, at the International Film School, Cologne
“It is always a great experience to work with Kathleen. She is dedicated to her work and has a trained view on scenes and the craft itself. She is focused and gives every student her utmost attention.Tremendously helpful is what we called the "actors bible", the handbook she created especially for this workout. It includes tons of information about English pronunciation, cold reading tips, marketing and working in the U.S. She created a comfortable working atmosphere, which allowed us to relax and experiment with our craft in a safe environment. Besides all that, I had a LOT of fun and met great people, which is a major thing for me!”
Melina Gammersbach

I coached  Julia Dietze, the leading actress in the feature film, “Iron Sky”. Her comments about the coaching:
“My personal experience in the private lessons with Kathleen were very inspiring, professional and grounding. It prepared me to act in a language that isn't my mother tongue and it gave me the confidence and the technique to be as natural and authentic as if I was playing in this language my whole life. Kathleen reduced my accent, and her understanding of the different jaw positions in English offered me lots of material to practise and rehearse.The American accent training with her made it possible for me to put my main focus on my acting, without being distracted or reduced by a language barrier. Besides that, Kathleen is a very strong and warm hearted artist, which I think is always a pleasure if these special people cross your path. Her story and her teaching was a blessing in my career”.
Julia Dietze

I coached Nadine Petry in a role in the English feature film, Tape_13 directed by Axel Stein (Berlinale Film Festival 2014).
“My name is Nadine Petry and I am a German actress. A few weeks ago I got a part in an English feature film Tape_13 . My English is fluent but since my part was a young American student I wanted to work on my accent in order to make sure that people believe I grew up in the States. My agent told me that Kathleen Renish is an excellent Speech Coach so I contacted her right away. Working with Kathleen was really easy and nice because she made me feel good and I had the feeling I can trust her. I really think working with her helped me to improve my pronunciation and after that I felt well prepared for the feature film. It was my idea to get myself a coach and when I talked to the director he was really impressed that I did the coaching and said it sounds perfect.”
Nadine Petry

“I really appreciate the coaching I had with Kathleen because she knows very well how to help you with the English language without ignoring the acting part. As English is not my native language and I had several international auditions to prepare for, I was looking for someone who could help me to improve my pronunciation. It’s even better because Kathleen is an actress herself, so she also has an eye on your acting ́cause you can't separate language and acting. Kathleen is such a positive person and she gave me such great energy in order to make my work great. And that ́s fantastic! Thanks a lot for that!“
Anna Julia Kapfelsperger

“My speech pathologist told me about Kathleen Renish and recommended getting in touch with her when I planned to audition in London two years ago. I'm still glad I followed that advice. When we met for the first time, I was overwhelmed because Kathleen was so incredibly well prepared with several big folders of material. But before we even got to start working on monologues, Kathleen really took some time getting to know me. Another plus back then for me: she recorded every lesson for me, so I could rework and progress on my own afterwards! And she herself wasn't distracted by taking notes either, but had been able to fully focus on me. In Kathleen I have found a friend in a colleague. By her frankness, always sharing from her own experience, she creates a truly creative space encouraging others to just let themselves go .”
Johanna Rafalski (Verbotene Liebe)

Comments about Acting in English 2 - day workshop:
“The content of the workshop was very diverse/multifaceted. It's unbelievable how much I learned in just 2 days. The workshop was very intense and because of the great atmosphere we had, I was able to release my emotions pretty fast. It was the best workshop I've ever had, because I learned how to behave in audition situations, how to use my body and voice, staying relaxed in improvisations and to perform a dialogue and monologue in front of the camera the best way I can. And all that even in English. It was an amazing and helpful workshop!"
Kathryn Julyana

"Kathleen has a great spirit and tons of creativity that she brings along to the workshop. She sees your individual character and helps you present it in the best possible way when auditioning for an English part.The written material that she provided us with, especially the handbook, was not even useful then, I use it now regularly when I prepare for English auditions."
Melina Gammersbach

ACTORS WHO NEED ENGLISH DIALECT COACHING OR ACCENT REDUCTION COACHING -
when you email me, please give me some informaton about yourself,
if you've ever worked in English before, what are your challenges / problems with English,
what help you feel you need, contact information for you and a link to your work.
This will help me to understand your needs. THANK YOU!